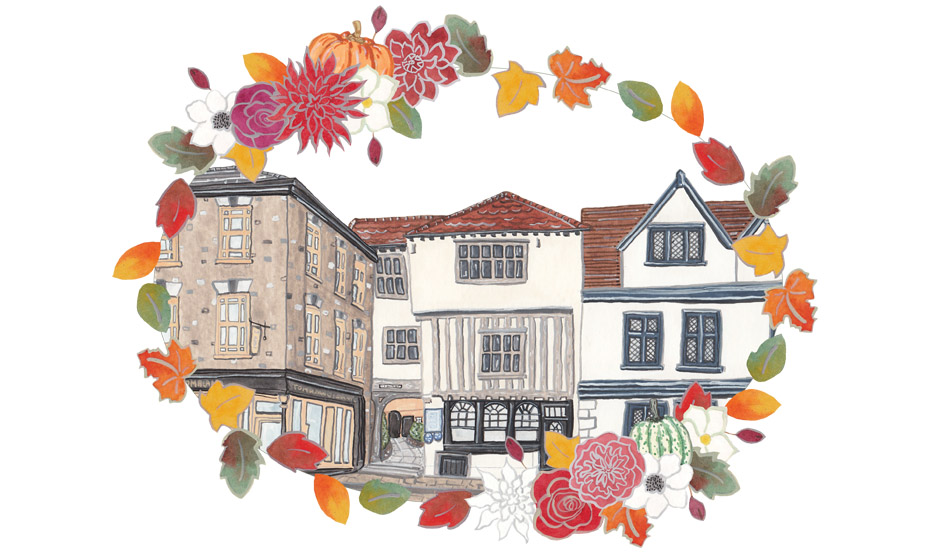 October calls in the spooky season and if you’re looking for a chilling tale and feeling brave, the Norwich ghost walk has many to tell.

Historic Norwich has a plethora of haunting stories especially so around Tombland. There’s a particularly grizzly story that is set in the sixteenth-century merchant's home, Augustine Steward House (the crooked building in the middle of my illustration above). The legend tells of the plague and cannibalism.

Now, we don't know how true the yarn is but I used to work in that beautiful building and it certainly has a creepy atmosphere, especially if you’re in there alone. I particularly didn’t enjoy having to go into the attic alone or with friends. I never witnessed anything but many colleagues did see the figure of a woman, I only just had the odd eerie, skin-crawling sensation.

Here's the tale told via The Curious Archive.

Naturally, a building with an appearance as strange as the Augustine Steward House has a ghost story attached to it. Though the story itself has dubious origins, it's morbidly fascinating nonetheless. As a small warning, you might want to skip this one if cannibalism makes you squeamish.

The first part of the story is entirely true: In August of 1578, Queen Elizabeth I along with an entourage of 2000 visited Norwich. The city went through an immense effort to prepare for the Queen's visit including theatre, dancing, and speeches galore, extensive redecoration of the Bishop's Palace where she slept, and an initial welcome party consisting of 60 of Norwich's best looking men dressed in black satin (and also the removal of heads and bodies of criminals from the city walls… can't have that).

Once the Queen and her entourage left Norwich, a devastating plague began to spread through the city, killing at least 4800 citizens. Some believe the correlation between the events is more than a coincidence. Plague pits from previous outbreaks were reopened to dispose of the increasing number of corpses. And city officials made the cruel decision to bolt up the houses that were deemed infected, locking their inhabitants inside to fight for their lives as they succumb to disease. Norwich rapidly went from a city of royal celebration to a city of death and suffering.

The second part of the story is based on local legend, but is certainly something that could have happened. It also makes a somewhat entertaining (though horrible, if true) twist to your typical haunted house tale.

During the 1578 plague, a family was living inside the Augustine Steward House. The parents were among those infected with the disease and the family was boarded up inside their home. The parents eventually died, leaving their daughter to fend for herself. A short time later she ran out of food and, in desperation to stay alive, began to eat her parents. After some time the authorities reopened the home to check for survivors and found the daughter dead beside the bodies of her parents with her teeth marks visible in their flesh. Since then, there have been reports of a young woman haunting the streets of Tombland immediately surrounding the Augustine Steward House.